Over the last twelve months I’ve been involved with three really big advertising campaigns up here in Scotland. They’ve all had their own requirements, all been an awful lot of fun and two of them are local so I’ve been able to see everything in person.

For the last ten years Edinburgh has hosted just part of the Foodies Festival. The Foodies Festival is a weekend food festival held throughout the UK that attracts local restaurants, food producers from all over the UK and further afield, food related products and there are also food demonstrations but chefs.

Due to my old work commitments I was only able to visit the Foodies Festival for the first time two years ago and I instantly loved it. The food available was absolutely delicious, the drinks really great and the whole atmosphere was really nice. The Foodies Festival in Edinburgh (it’s also hosted in Brighton, London, etc etc) is hosted in Inverleith Park which is just five minutes away from my home.

The first year I visited I focused on BBQ foods, last year Mark Greenaway had a pop up tent (he’s a local celebrity chef) so I kept visiting his tent, as well as the BBQ, and this year again I ate lots of BBQ food but also tried a few other things. So it was great when I was contacted by the organiser of the Foodies Festival and asked if I could provide illustrations for their advertising campaign for 2015. This would include their posters, entry tickets, flyers and website. Here are the results.

All of the elements including the food items on the stands had to be illustrated individually so you can maybe get an idea of the amount of work that can go into a project like this. 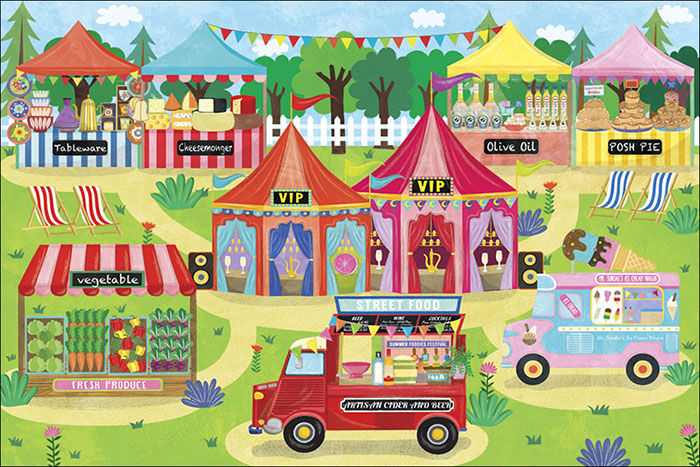 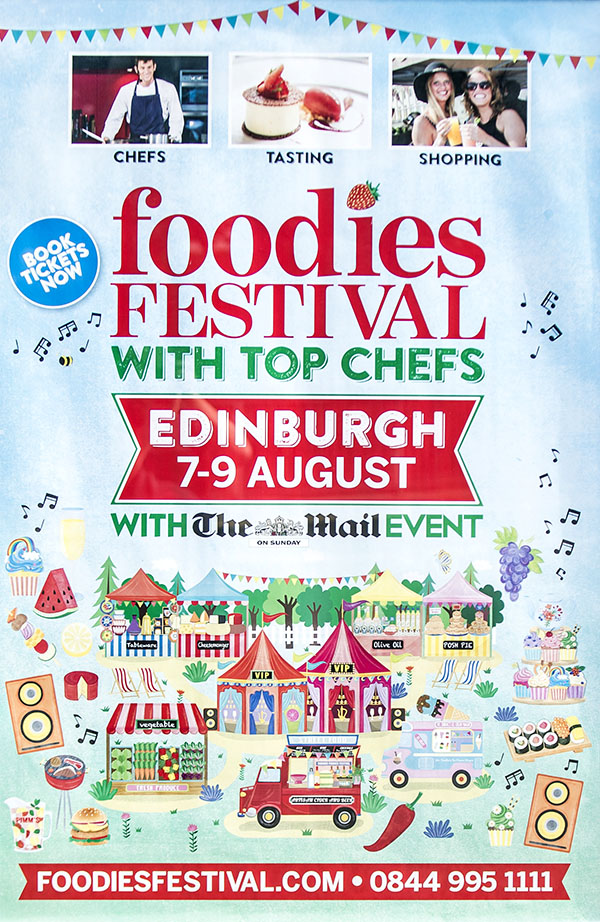 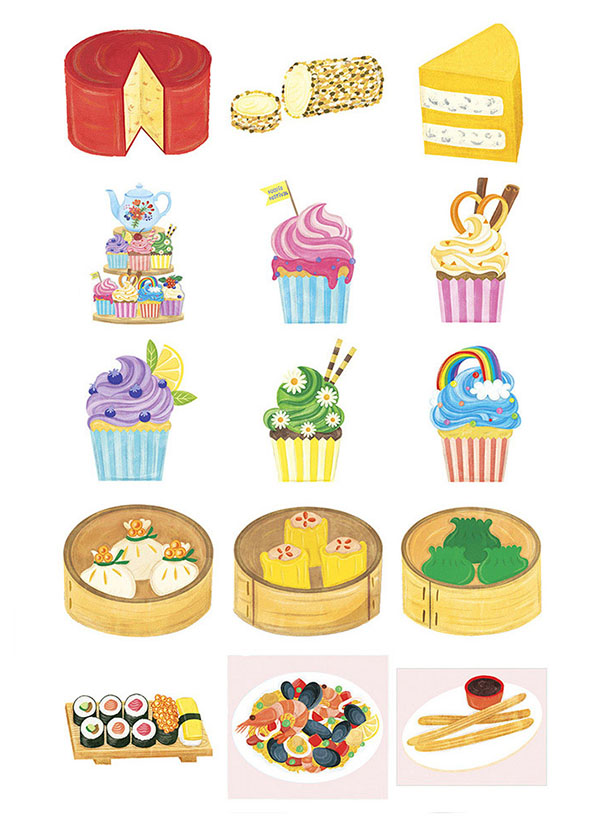 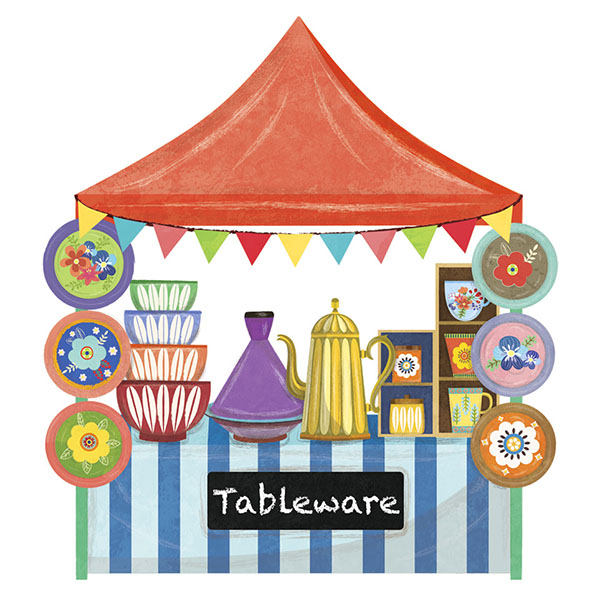 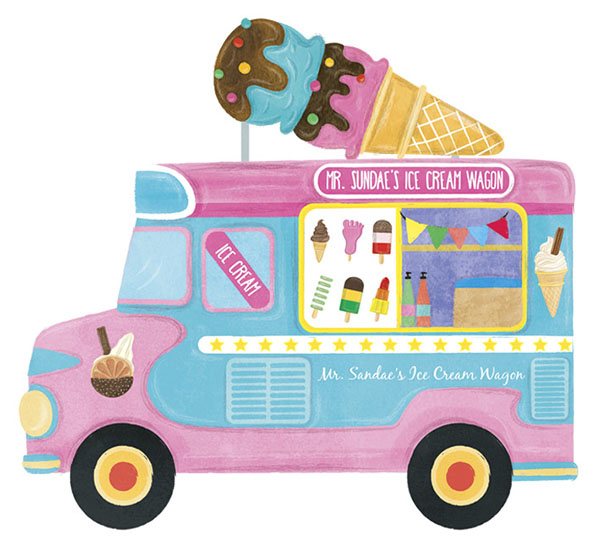 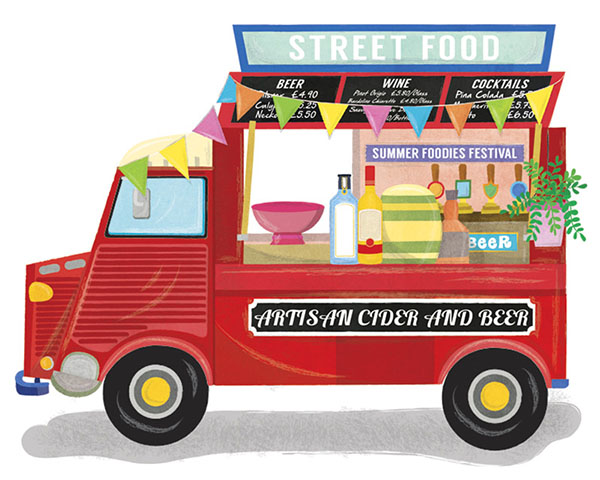 For summer 2015 I worked with the Royal Botanical Garden Edinburgh on an advertising campaign designed to attract young children to the gardens. The RGBE (as it’s abbreviated) is a learning/scientific site and as part of this they wanted to design a trail throughout the gardens which children could follow and discover new and interesting things. The poster for this campaign is yet to be advertised (this was delayed due to summer events at the gardens and also the largest smelliest plant in the world blooming) but once the poster is done then I’ll show it here. All of the illustrations from the booklet below and the poster (minus text) are mine and there are also some element files to show details within the illustrations.

This was another really fun project to work on. 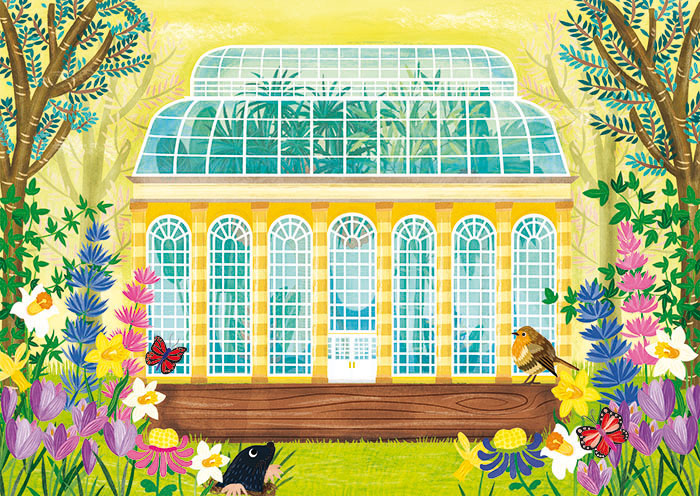 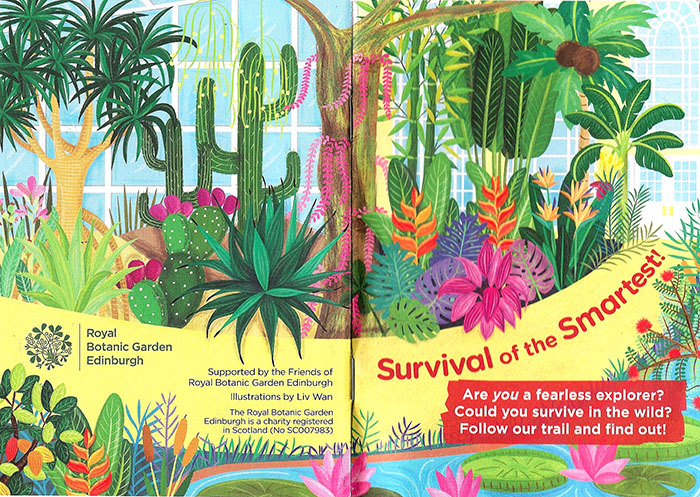 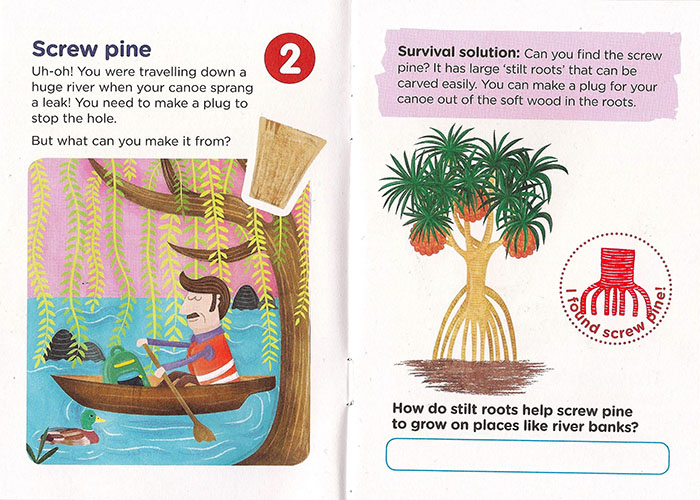 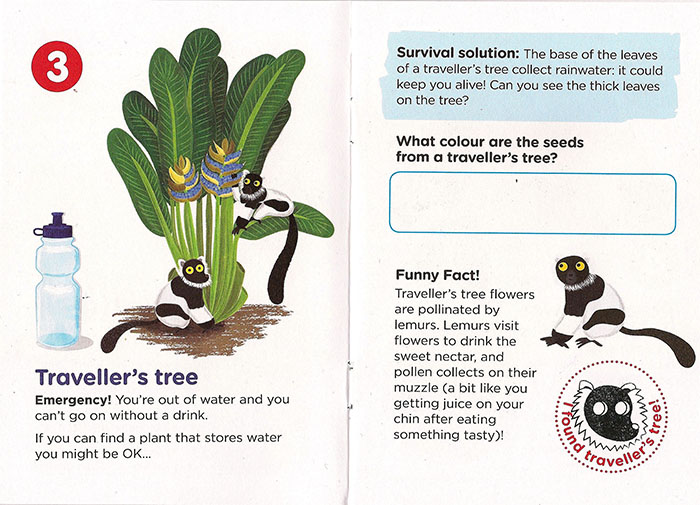 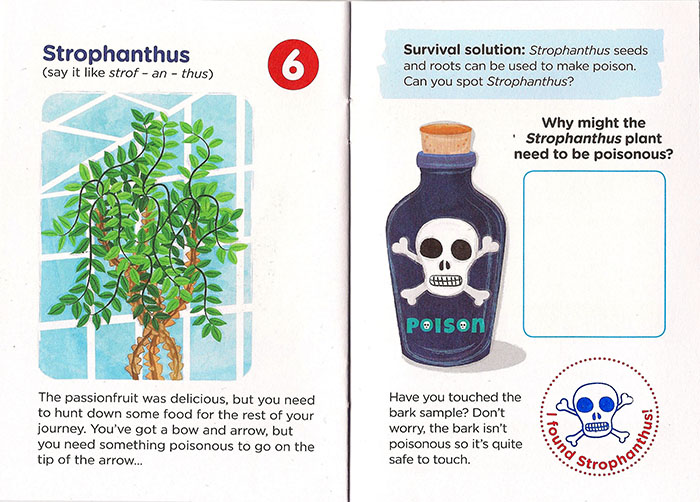 The oldest of the three advertising campaigns that I worked on in the last twelve months was for the Highland Council entitled “Carbon Clever”. The Highland Council wanted to create a campaign to make people aware of the carbon footprint they produce and ways to reduce this. Instead of everyone travelling by car they want to encourage people to use either mass transport like a train or bus or even to ride a bicycle when possible.

My brief was to really make this as fun and colourful as possible, to make people look at the illustrations and say to themselves “wow that’s really cute but makes perfect sense”. In order there are people on a bus, a man riding his bicycle around the city, two people meeting and falling in love at the bus stop and someone at a train station.

My style as an illustrator has progressed enormously since this project was completed but I enjoyed working on this so much and my husband absolutely loves this project so I had to share it. 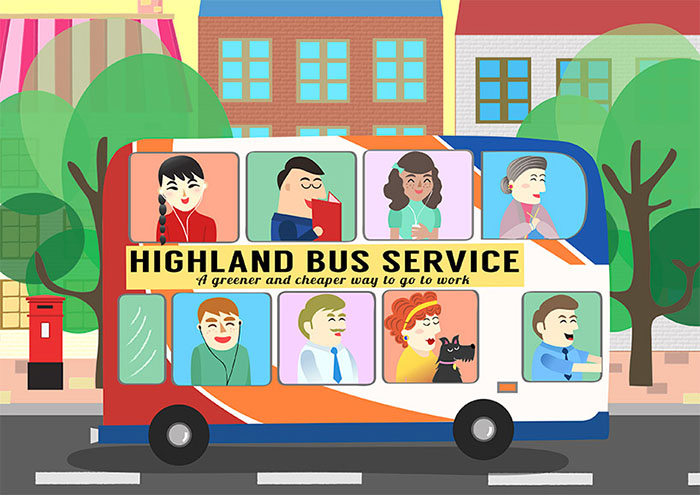 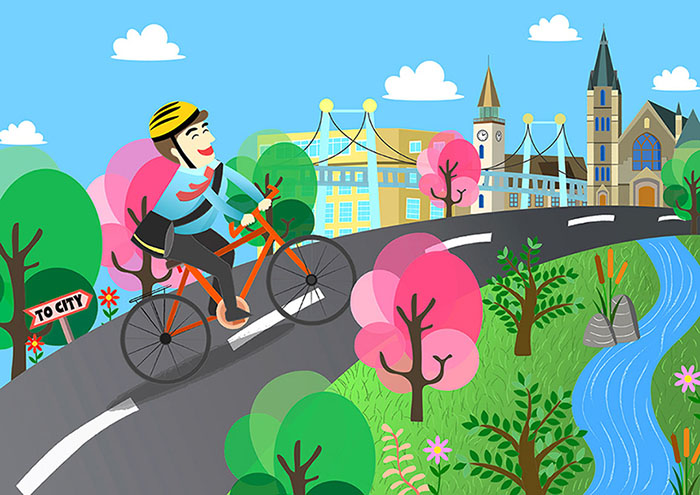 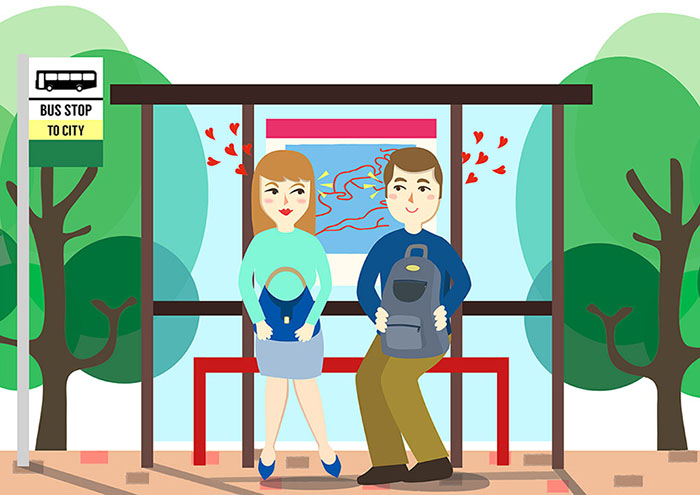 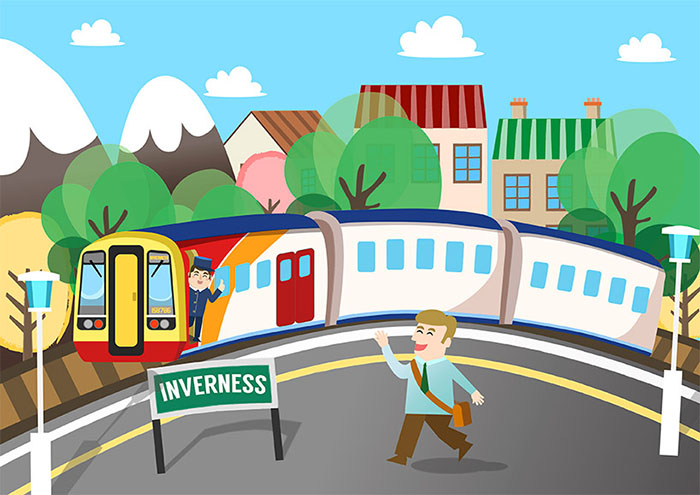