Nigel Slater Toast Book Cover Design
July 03, 2016
Book Cover Design | Food Illustrations
Earlier this year I set myself a self-initiated project which entirely focused on book cover illustrations and designs as I have to date not been hired to make anyone book covers.

When I was an illustration student I always liked any book cover illustration and design projects that we were handed and I’ve been in discussions with a couple publishers about creating book covers but so far nothing has come to fruition. While I’ve been published twice (soon to be three times) for my cookery one of my big illustration targets is to illustrate a book cover and get it published. 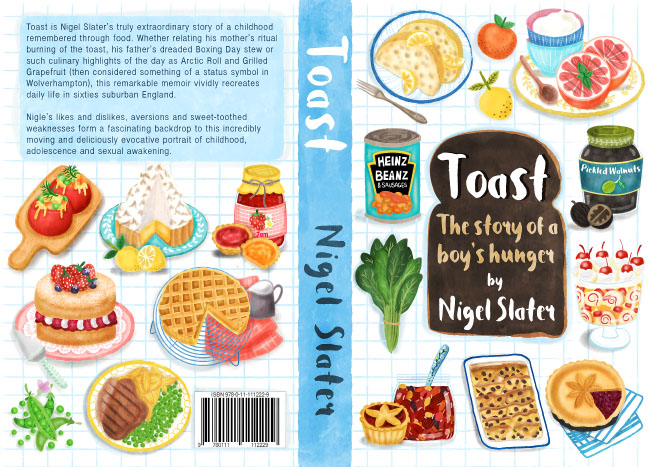 So as a workaholic I spent months illustrating and designing 12 book covers and this biography, written by Nigel Slater, who is a famous British food critique and cookbook writer, is one of the books I illustrated.

I have to admit before watching the movie “Toast” (The same name as the book), I had no idea about this book and little idea about who Nigel Slater. I mean neither of these as negatives but I don’t watch British TV (don’t have time) and Nigel Slater isn’t known in the East. If I do watch any TV shows I use either Netflix or Amazon Prime Video. But the movie was really moving and touching so I decided to use this book as one of the 12 stories/books I illustrated for this project.

One of the interesting things about this book is there are no chapters in this book. Each short story is titled by different kinds of foods and all the stories are related to food. For example, Nigel thought the smell of bread and butter pudding is the symbol of  love and hugs (bread and butter pudding is one of my favourite dessert in UK! The smell and the taste of this dessert always puts a big smile on my face.), his dad’s famous trifle, grilled grapefruit is the symbol of class, he had a fight with his mum over the mincemeat for mince pie just a day before she passed away…

This book is an eye opener for me to classic British food. I’m originally from Taiwan and in Taiwan we don’t know much about British culture (it’s generally thought everyone speaks like the queen and everyone drinks afternoon tea with their pinkies in the air. How wrong are we?!). I only got to know UK and British culture once I moved to the UK nearly 10 years ago and while I worked as a fine dining chef for much of that time, the restaurants I worked in focused on fine dining rather than normal home cooking. So as a foodie and former chef I just really enjoyed reading how he described each food and how those foods related to an important event or experience in his life. I can completely relate as a lot of my childhood and growing memories were related to food as well. 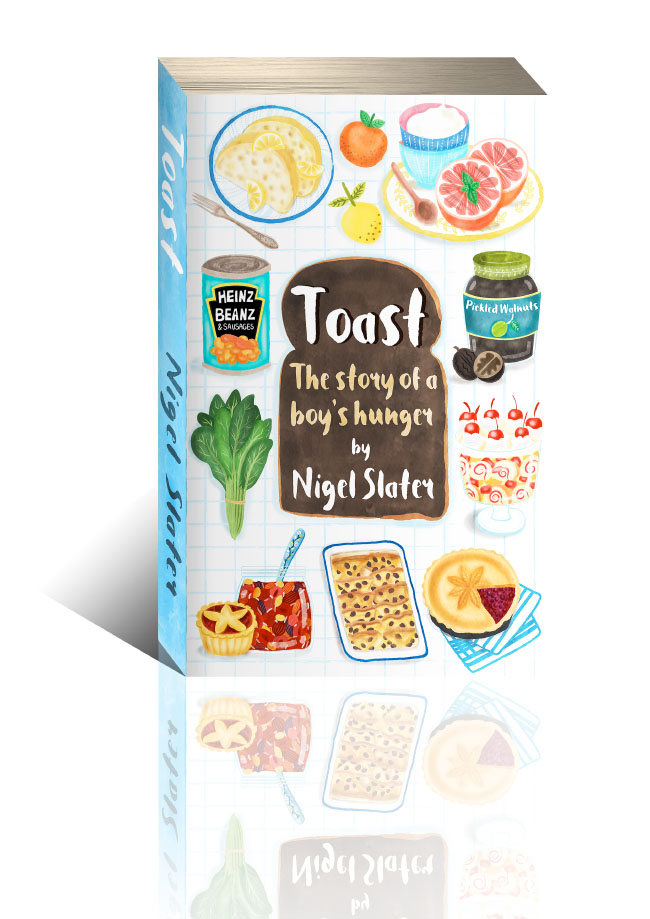 Due to the sheer number of delicious and interesting foods in this book it was really hard for me to choose which ones should be on the cover so instead of choosing one I illustrated many different foods for the cover. These foods represent life stories and memories related to the writer.

I really enjoyed illustrating these foods and this is the first time I’ve not only illustrated food but thought about their surroundings as well. So when I illustrate each food I’m also thinking about what it will come with, for example patterned clothes distinctive dishes and cutlery. I had great fun illustrating all these foods and can’t wait to illustrate more food like this in the future.

Because I enjoyed illustrating this book cover so much I even decided to print it out on A4 notebooks and to sell them in my shop on etsy. Unfortunately I’ve had some problems setting up a shop on Etsy as I don’t have UK nationality and they won’t accept a Taiwan passport (or any Eastern ID) to verify my identity so they won’t let me use their direct payment service. But once this has been remedied and my shop is bac online I’ll announce this notebook on my Facebook page, twitter, Instagram and blog. So please stay tuned!

The notebook is A5 size and the paper inside is blank paper because I like to use blank paper. I feel you can do much more with blank paper than rulered paper as you freedom on your page. The cover is 400gsm card and I’m really pleased with the supplier I used because the notebooks printed out exactly how I wanted them to look. These notebooks are £5.50 each excluding postage so if you’re interested please contact me by email. 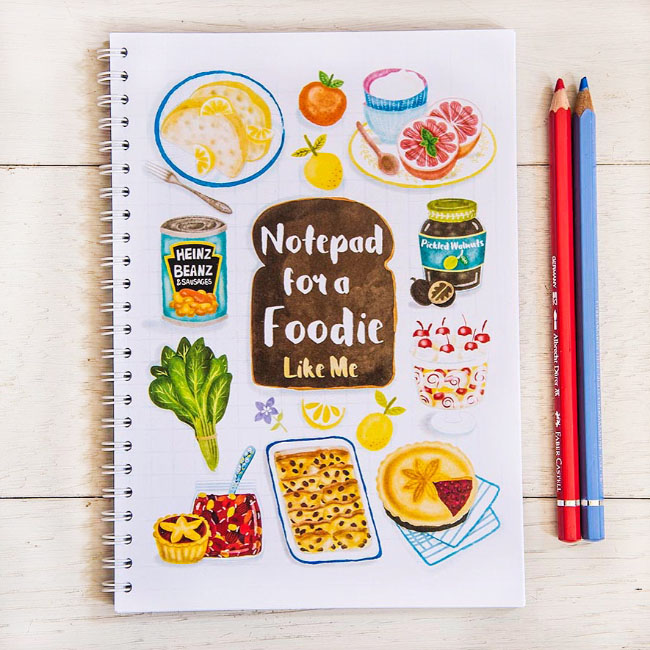